A friend recently reminded me of a book on short stories of that was published a few decades. The book, “Stories from the Fog’s Inn” was not on my library shelf and so I went off to search and after a month of poking around online and in the corners of local used book stores, I finally have a copy. Published by Charlotte County Community Ventures Inc. back in 1990, the book is a collection of short stories steep in local folklore. The majority of the book’s sources come from “storytellers” from many of the county’s schools. Despite being full of “stories that my grandfather told me”, this book does provide for an interesting read and sheds light on many local folklores include tales of ghost and place names. A few of my favorite stories include: “Lake Utopia Sea Monster”, “Milkmaid of Tunaville” and “The Legend of Deer Island”. Though not built on facts or historic research, this book is a must for anyone interested in the tales of .
. 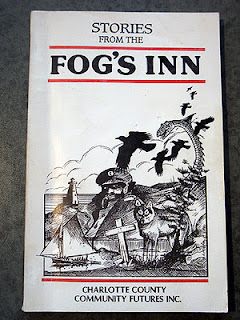 Remembering those that Served in your Family’s History

Few family trees are without at least one or two relatives that served in a major conflict. Some of us may have a dozen relatives serving between the two World Wars and numerous more serving in wars of long ago such as the War of 1812 or the Boer Wars. More recent branches on our tree highlight those who participated in the Korean War or the recent conflicts in the . Whatever the conflict may be, it is at a time such as this (Remembrance Day) that we stop to think about those that put themselves in harm’s way or those that gave the ultimate sacrifice so that we can enjoy the freedoms that make our society what it is today.

Each November, I take time to reflect on those in my family tree that served. My great-grandfather, Donald Bradford Sr., had four brothers that served in the First World War: Harold, Martin, Eric and Winnie. These brothers, like so many young men in , enlisted to fight in the war. From my own research, approx. 1,170 men (and women) served in the First World War from . With respect to the 1911 Census, that is approx. 18% of the population of the county. As many men, Harold, Martin and Eric serve with the “Fighting 26th”, the New Brunswick Regiment.  While these three older brothers went overseas, Winnie, the youngest of the four, served at home in various guard duties with the 236th (The New Brunswick Kilties) Battalion. Through their individual war records and the information obtain in battalion diaries, a picture of their lives can be seen as well as a story on a period of time for the family.

Bradford Brothers
(left to right) Winnie, Eric, Harold, Martin
On , Harold, Martin and Eric departed on the “SS Olympic” from however they would not see action until November 1917. During their time in , the brothers learned that their father, Martin Byrne Bradford, has died. By the Christmas of 1917, their second Christmas away from home, they were encamped not far from the front lines. By the follow summer, Martin was killed in action near the town of on . One family story says that his older brother, Harold, watched as Martin lied wounded amongst barbed wire, unable to reach him. He was only 25 years old and is buried at , not far from . A year prior, younger brother, Eric was severely injured when he was shot in the head during the Battle of Hill 70 near . Eric eventually made it back home however he died from his injuries on May 19. 1919. I have heard many stories of Eric’s return and how his injuries were so severe. He would go into mad fits and experience excruciating headaches. One medial report in his military records indicate that “brain pulsations are visible at the wounded area” and that little could be done for him. One doctor did little but prescribed eye glasses. Eric is buried in the , not far from his parents. Harold, the eldest of the brothers, returned back to in August 1919. He would cross the same ocean that he and his two brothers sailed across only three year prior. In those three years that passed, two of his brothers, his father and several close friends are dead. However, if there is a glimmer of hope in this story it is that Harold returned with a new wife and a baby daughter. Harold, with his new family, settled in , and many of his descendants remain in that area today.
I’m sure you family tree has wonderful stories such as these. The Library and Archives of Canada can offer so much to family historians with military records. Be sure to reach out to the LAC for assistance in discovering your family’s military legacy. (http://www.collectionscanada.gc.ca/military-peace/index-e.html)
One of my favorite books is “'s Fighting 26th: A History of the 26th New Brunswick Battalion”, written by MacGowan, Heckbert & O'Leary (1995, Tribune Press; ISBN: 1896270026). This book is must for anyone researching their family’s participation with the 26th Battalion. Not only does the book draw extensively on the Battalion diaries with a detailed timeline of troop movement and engagements, but the books also offers an index, or muster roll, of those that served with the battalion. The book is now long out of print and used copies can easily catch up to $100-$150. It worth the catch and far worth the money. 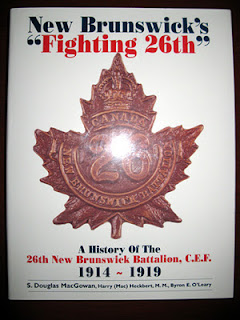