For the last number of years, I have been researching Charlotte County's involvement in the First World War so imagine my delight when I was put on the trail of a memoir of a former Charlotte County resident retelling his days as a soldier in the war. So a special thanks to former Mayor of St. Andrews, John Craig, for putting this book on my radar and into my library.

"As It Was Then: Recollections 1896-1930" is a short, 106 page book written by Prof. Dr. Arthur O. Hickson, and besides telling an interesting story of his life, it provides details into life on Campobello in the early 1900s but more so, it offers insight into life as a solider in the First World War. The book was written in 1984 and published in 1988 by Acadia University.

Dr. Hickson was born on Campobello Island on 22 January, 1896, the son of Arthur Wellsley Hickson and Alice Blanche Taylor. In 1912 a young Arthur Hickson moved with his family to Saint John, as his father accepted a teaching position there. Prior to start of the First World War, Hickson joined the Militia in Saint John. Most of the book is focused on Dr. Hickson's war experience; from the training camps in Canada and England, to the front lines of Vimy and Passchendaele.

After the war, Arthur Hickson enrolled at Acadia University. After graduation, Hickson then onto teach at Brown, receiving his PhD there. Soon after he went on to teach at Duke Universi88ty, retiring in 1965. Dr. Hickson died on 14 October 1989 and is buried in Maplewood Cemetery in Durham, North Carolina, with his second wife. 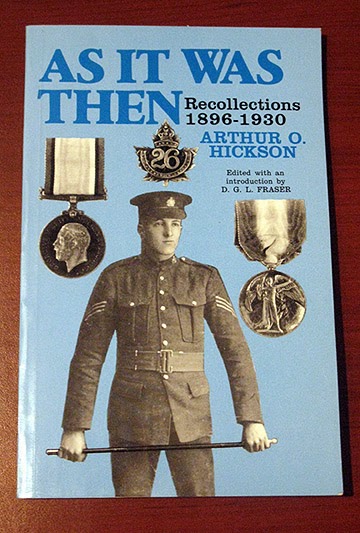