Though published in 1975, Passamaquoddy: Genealogies of West Isles Families still represents the most recent cumulation of family genealogies for the Parish of West Isles of Charlotte County, New Brunswick. Author Martha Ford Barto has compiled a comprehensive report on over 70 surnames from the areas of Deer Island, Campobello Island and various other smaller islands, as well as points along the mainland of both Canada and the state of Maine. However the 348 page books does not jump immediately into a genealogy report; Barto first offers the reader a wonderful reflection on the history of the Passamaquoddy area, from the early settlements of the Passamaquoddy People and Champlain’s settlement at St. Croix Island to the establishment of island communities by early settlers. From reading Barto’s sources, it is easy to see that she put many years of research into this single, soft bound book. Not only does she utilize several local history books that have been long forgotten or simply lost with time but also incorporates the rarities of family bibles from local families and church records, something that not every researcher would have access to. Overall, Passamaquoddy: Genealogies of West Isles Families is an asset for anyone interested in families from the Fundy Isles or general history of New Brunswick. However good luck in acquiring a copy as this book has been out of print for several decades and is quickly become one of those long lost books that Barto herself used as reference. 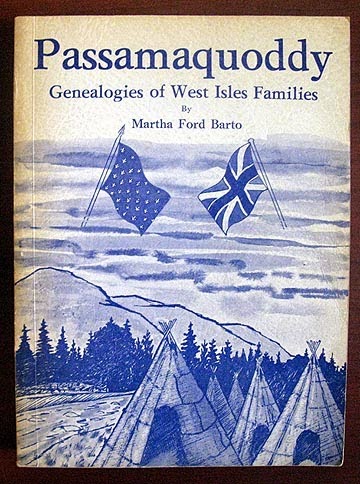