What's Going on at the LAC

If I had a dream job, it would be working at the Library and Archives of Canada (LAC). However, this national institution has been through allot changes over the last decade. It has been the target of countless budget cuts which have affected everything from staffing numbers to conservation projects. For more on cuts to the LAC, I found this insightful read, The Wrecking of Canada's Library and Archives by Myron Groover. So it came as no surprise that, based on a 2011 Public Service Employee survey, the LAC ranked at the bottom of the list of "Best Departments to Work in the Federal Public Service". That means below departments such as Corrections Services of Canada and even in economics and finance departments!! Shouldn't Canada's heritage be exciting!?

To make matters worse, along comes a new Code of Conduct to help "muzzle" staff of the LAC. On March 24, I received this statement from The Canadian Association of University Teachers in response to this latest action: "Political pressure sometimes works.  In a victory for staff, Library and Archives Canada (LAC) has withdrawn its controversial Code of Conduct put into effect in early 2013. The code contained severe restrictions on staff behavior, both in their public and personal lives. The restrictions on LAC employees garnered media and public scrutiny and, in the wake of intense public pressure, LAC administrators placed the code under review. In December 2013, a revised Code was introduced. This new code represents a significant improvement. Employees are still encouraged to report on their colleagues for any failure to comply with the code, a shameful policy that contributes to an unhealthy workplace. However, restrictions on employees’ professional development activities have been substantially reduced and references to discipline for personal opinions expressed in limited access forums have been removed. At a time when Canadian culture institutions are being decimated, it is easy to become overwhelmed and forget to celebrate our victories, however small. The changes to the LAC code of conduct were only made because we spoke out collectively, an example of how we can make a difference. Our current government may be attempting to rewrite the past, but together we are in control of the future." More details on this subject can be found at National Post Article - March 15, 2013 (Margaret Munro)

What is going at the LAC is very unfortunate. The LAC are the keepers of our countries history, our heritage. It is not just a place that stores old documents and photos but also our National Library. So maybe I should adjust my dream job (at least until there is a change of government in Ottawa)... perhaps the Provincial Archives of New Brunswick is hiring?
Posted by J. N. Gaudet at Saturday, March 15, 2014 No comments:

Over the last three months, I have acquired two books dealing with a topic that is perhaps somewhat uncomfortable for many... death. While these books may deal with aspects of death such as the customs surround the inevitable event, as a genealogist, my interest in the subject as grown likely due to the time that I spend in cemeteries. From outside, looking in, we can learn much from cemeteries as they relate to the quest in our family history. Headstones can provide vital information such as dates of birth and death, but many more in recent decades provide date of marriage. However be warned: the data on headstones can be incorrect as it is often provided to the headstone company by the family and they may have provided the incorrect date of birth for your great-grandmother.

So as I explored cemeteries from Ireland to New Mexico, from Germany to Cuba, I found it very interesting how different cultures buried and memorialised their dead. While there is not a large collection on the subject, I was able to add to my own collection two new additions:

Corpses, Coffins and Crypts: A History of Burial by Penny Colman (1997, Henry Holt and Company) was written with a target audience of young adults. Eight chapters voyage through subjects on dealing with death, cremations, cemeteries and what happens to corpses. The book looks at aspects of death and dealing with dead by various cultures and throughout history. This book may be a good option for those of you looking for a little (not a lot) of insight into subject. Colman has crammed a fair amount of research in this 205 page book but avoids information overload.

The History of Death: Burial Customs and Funeral Rites, From the Ancient World to Modern Times by Michael Kerrigan (2007, The Lyons Press) may read more like a text book for those looking for an easy read on a difficult subject. And since it is formatted in such as way, the expectation may be a little higher. Therefore, I would have like to read more on the history of cemeteries, particularly those in North America. 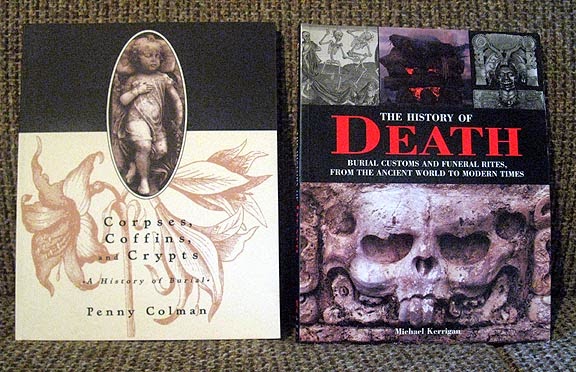 Soldiers of the First World War

Since 2006, I’ve been compiling a list of First World War Soldiers from Charlotte County, New Brunswick. Early in the project’s life, I gathered the names of soldiers from local memorials and church honor rolls. War Memorials are a common sight in many Canadian communities, and much like honor rolls which tend to be commonly found in churches, often list names of those that made the ultimate sacrifice but seldom do they list those that served and survived. Then there are the local Royal Canadian Legions. With the dwindling numbers of its members along with Legion Hall closures in recent years, the RCL is truly a source that is becoming more and more scarce. But apart from the few list that local Legions can provide on former First World War members, their information is just as limited as the stone memorials in the nearby park. In many cases, it was the local Legion that erected such memorials. However these sources of information are not without errors. In the case of three local war memorials erected by local Legions, each contained names of 2-3 soldiers that I was unable to confirm. Those names had no official military record or listed with the Commonwealth War Graves Commission (which list war causalities).

Another source has been local newspapers of that time period. In my case, the Saint Croix Courier newspaper of St. Stephen did an exceptional job during the period of the war to deliver news articles that, apart from its local perceptive and attitude towards the war, included list of recruits as well as publish letters from the “Soldier Boys” overseas. But even this source can provide names of soldiers that one is unable to confirmed through official sources. Next for sources is the Commonwealth War Graves Commission. Their website can assist in providing details on casualties of the war. One can obtain dates of death, service numbers, regiment/battalion that the soldier served and the burial location of soldiers who died during the period of the war.

Undoubtedly the best source for information on Soldiers of the First World War is no doubt the Canadian government. The government enlisted/drafted, paid, trained and transported (and buried) our soldiers. One source within the government that is commonly overlooked is the Department of Veteran Affairs. Veteran Affairs maintains a “Remembrance” section on its website but more specifically, its “Canadian Virtual War Memorial” section can provide similar data found with CWGC though this database is specific to Canadians and may contain additional data and if lucky, a photograph of the soldier. However, it is the Canada government’s archives, the Library and Archives of Canada, located in Ottawa which can provide the best source of information. The LAC can certain be considered one of those “official” sources. Its holds the records pertaining to Soldiers of the First World War. The vast majority of those that served in the First World War have a military file with national archives. Those files can contain between 25 to 75 pages, and those pages may include enlisted documents, payroll, health records, soldier movement data and in many case, a Last Will and Testament of the soldier.

Keep in mind the task of tracking down soldiers for a specific area can not be easily obtained from the sources above. Even in the case of the records at the Library and Archives of Canada, a name or service number is required to search for a specific soldier and searching by location (place of birth or residence) is not an option. Therefore, understanding the primary regiment(s) or battalion(s) that were active in the region is extremely beneficial. For Charlotte County, New Brunswick, the 26th (New Brunswick) Battalion, the 55th Battalion, the 115th Battalion and the 236th Battalion (New Brunswick Kilties) were among the most active in recruiting and engaging the young men of Charlotte County. Each of these battalions had their own series of regimental/service numbers. For example, regimental numbers from 69001 to 71000 were those of the 26th Battalion (aka “The Fighting 26th”). So since many Charlotte County men fought with the 26th, would it be best to look at each soldier in this series of regimental numbers? Yes. Of course, that easier said then done. Or is it? Perhaps prior to the age of the internet, a researcher would need to travel to Ottawa and request each soldier record in the series. Well, I am sure the staff at the Archives weren't very excited with such a request. Thankfully, the LAC has placed the enlistment document (Attestation Paper) for most soldiers on its website so this process is somewhat more effective and can be completed in the comfort of your own home.

For a period of time, fellow researcher and computer expert Marc Leroux developed an extremely helpful computer program that made the process of searching LAC’s record even more efficient. Marc’s “CEF Soldiers from the Great War” utility, which came on the scene back in 2006, was a god send and made the process of searching soldier by soldier/regimental number by regimental number very quick. Unfortunately, the program was not update to work on newer computers operating on systems above Windows XP. And to make matters worse, the LAC changed its website recently so that even those of us using older systems were not able to use the Utility to navigate directly to soldier records. It was tremendously helpful while it lasted and I certain give thanks to Marc Leroux for his gift which saved me months of work. Maybe one day another program will be developed or the LAC itself will deliver a more effective search platform. With the way LAC has operate in recent years, my hopes are the arrival of another Marc Leroux to save the day! 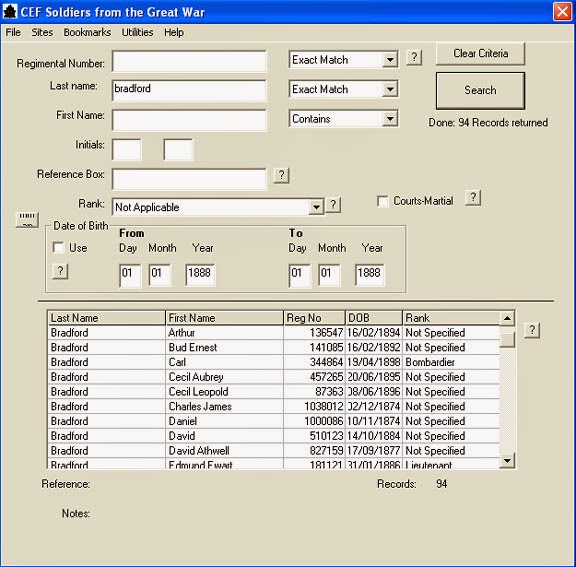