A few weeks ago I had the great pleasure in visiting Friendship, Maine, a picturesque fishing town centrally located on Maine’s coast. The town may be well-known for its lobster but a part of the town’s colorful history just so happens to also be a part of my family’s history. Referred to as “The Massacre at Friendship” or “The Raid on Meduncook” marks a most unfortunate event in the history of early settlers in Maine. By the way, Meduncook was the town’s former name. The story is that on May 22, 1758, Joshua Bradford, a great-grandson of Gov. William Bradford of Plymouth, Massachusetts, was brutally murdered at the hands of Indians while living at Friendship. Also killed in this event was Joshua's wife, Hannah; their infant son (Winslow); a local woman (Mrs. Mill) and her child. Most of the other Bradford children managed to escape their would-be murders however one daughter, Melatiah Lydia, suffered serious injury as she fled towards the British Garrison across the sand bar. She and others survived and went on to provide many descendants. Two of Joshua's sons, Joshua II and Benjamin, were captured and taken north by the Indians. They later escaped and returned to the area. Benjamin is my fifth great-grandfather and would later settle in Charlotte Co., New Brunswick with many other British Loyalist. He was grant land in Bayside and operated a ferry service for many years from Bayside to Todds Point. I have so much on this event that it would likely overrun this little blog so contact me if your looking for further details. While visiting Friendship, I made a special visit with Mrs. Margaret (Watton) Gagnon, who is also a descendant of Joshua and Hannah Bradford and who works with the Friendship Museum. We exchanged details on the Bradford family and the horrible event. I also took some time to explore the "scene of the crime" and walk the island where the garrison once stood and the site of the graves of Joshua and Hannah Bradford. The island is now privately owned by the Carlson family but I was allowed passage after explaining my situation and asking for permission to visit the graves, so a special thank you to Jane Carlson and her family. 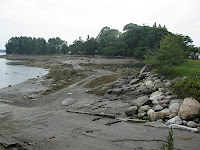 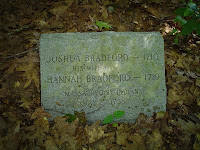 Gravestone of Joshua and Hannah Bradford on Garrison Island
Posted by J. N. Gaudet at Saturday, July 28, 2012 No comments: